How Divorce Can Change Your Sex Life for the Better

In this final episode in the Her Side series, featuring special guest host Kincaid McMinn, you’ll learn a bit more about your host, Sarah Martin. The conversation is juicy, and vulnerable, sharing Sarah’s experiences with bullying and where she has learned to use her voice, all, of course while circling back to sex and relationships with men in STEM.

Sarah is a 35-year-old woman from the United States with a bit of wanderlust. Leaving home when she was young to travel, Sarah has lived all over the world, with extended stays in the U.K. and Poland. Now, she calls Lithuania home. She’s a Certified Sex Coach and sociologist, who loves podcasting and learning new things.

When she was young, Sarah struggled a lot with relationships. Married for the first time to someone she first met when she was 19, most of her adult dating life didn’t happen until her late-20’s after divorcing her first husband. When she returned to the dating world, everything seemed to have moved on from what she remembered in high school. In the interim, online dating had become incredibly popular.

While living in London, a colleague got her involved in a dance organization that was run by a polyamorous woman. This opened her eyes to relationships Sarah wasn’t aware of and had deep down been curious about. From there, she was connected to a sex-positive community in London.

Her ideal dates include coffee and a walk in the park, playing VR, and attending Hackathons.

Dating online was Sarah’s favorite way to meet people. While living in Poland, she also got involved in the polyamory community. The filtering that online dating provides is ideal because the majority of people there are looking to date people, whereas out in the wild that initial filter does not exist. She’s also met people offline – a wonderful person at a workshop in Germany, swing clubs, and through friends.

Sarah asks people out, exclusively, which she unpacks. Working through gender roles, she found that an overall desire did drive her to ask for what she wanted instead of sitting back and waiting for it. She relates this to being bullied and being repeatedly tormented about weight and appearance. With enough time, things others say about you sound more true. However, those struggles led her away from home at a young age and gave her the experience necessary to be the person she is.

“In a lot of our struggles, there are usually gifts.”

Sarah makes it clear she is not heterosexual, however, her experiences with men have been mainly with men in STEM. Although a trend, she has also found herself attracted to people outside of this box; creatives and musicians (she had a bit of a musician phase), noting that the relationships with men she has enjoyed the most were with men in STEM.

What do these people have in common? A passion and a deep interest in life. She craves someone with a desire to learn, a vivid imagination, openness to the world, and the ability to communicate, even when it’s difficult.  Sarah shares that being ruthless about filtering for communication purposes has made experiencing what she wants easier.

Specifically, her attraction to men in STEM was led by their passion, curiosity, and drive to understand. For example; physicists wanting to explain the fabric of the universe, or developers being those constructing the online reality that we all spend so much time in. She adds, “if you want to be interesting, be interested.”

Additional qualities she’s attracted to are kindness and gentleness. Especially when you’re into ‘kinky shit,’ it’s nice to know that you have someone who defaults to kindness, making it easier to explore edges in the bedroom. Sarah also returns to communication, noting that it’s not about “good” or “bad” communication so much as it’s about the willingness to communicate in the first place. Stumbling and awkwardness is fine.

For Sarah, the best parts about dating men in STEM are the types of conversations they can have. Sarah describes herself as curious, and being in relationships with people who are used to being a little ‘different’ or out of the norm themselves just adds to that curiosity. Also, there’s an advantage because there is less of a desire to fit into a ‘man box’ or to fit in. It’s nice to be accepted for who you are.

On the other side, she wishes men in STEM initiated more and felt free to speak up about their desires. Being the initiator often can create some frustration. Additionally, Sarah shares frustration with partners being workaholics. It’s a double-edged sword – having a passion for what you do is sexy, but the temptation to work constantly can make a partner feel less important than work.

Men in STEM are fantastic with problem-solving, and they often are unaware of this gift that comes so naturally. Their curiosity and deep interest outside the mainstream is hot and some can be shy about sharing the ‘boring’ details, but it’s attractive.

Sarah has found that arrogance and looking down on others can be a common turnoff that men in STEM are unaware of. She describes it as her ‘sexual kryptonite’. Looking down on other professions, or socio-economic situations is disrespectful of others’ dignity. She notes that kindness should be the initial landing space. Physically, Sarah finds green eyes, beards or facial hair, and rectangle glasses irresistible, while noting that wearing clothing that is too big, or bad hygiene are automatic physical turnoffs. That, and right wing political affiliation.

Time to Do the Damn Thing

How does Sarah know she’s interested in taking things further? Fairly quickly, she shares, through good conversation and kindness, and their smell. In the bedroom, she wants more smiling and laughing, making the mood light. Showing pleasure with more noise, and knowing when to have a sense of humor about the situation.

She thinks that partners could ruminate less during sex and come out of their heads. Your partner can tell if you aren’t fully present. She also shares frustration when partners don’t speaking up when they want or don’t want something.

For her takeaways, Sarah wants you to know you’re so much closer than you think you are. She hopes that you can begin to see yourself the way others see you and stop worrying about being good enough. Know that you don’t have to change who you are or be someone you’re not. Sharing the connection and joy in your lives is so sexy. You’re deserve so much goodness, pleasure, and joy, even when the struggles make it seem that all hope is lost. 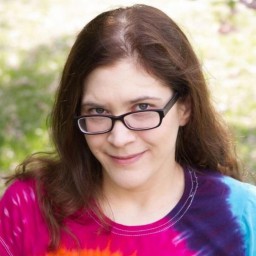 Master the Basics of Body Language

4 Mindset Mistakes that Screw Up Your Sex Life

One Woman’s Unusual Approach to Setting Up Dates

Quite Possibly the Best Newsletter Ever

Want to be part of the inner circle? If you enjoyed How Divorce Can Change Your Sex Life for the Better, friend, come join us on the inside by signing up below.

What are you looking for?

Learn to Flirt with Body Language

Subscribe to the Dignified Hedonist newsletter to receive regular updates and tips on sex and relationships and get instant access to this 30 minute video that covers 2 basic principles and 4 essential dimensions of body language.